June 25, 2011
AKA my new favoritest cake ever.  I bulked up the recipe for That Chocolate Cake (added a bit more of all the ingredients except for the eggs - probably 1/8 extra since I was using two 9" square pans instead of two 9" rounds). Cake came out pretty big though, so you probably don't have to bulk it up, and just have thinner layers.

First I preheated the oven to 350F and lined the cake pans with the parchment.  Then I put all the dry ingredients into a bowl and combined.  I added the eggs to the oil and beat a little bit with a fork.  Then I added the oil mixture and milk to the dry ingredients and stirred gently until just combined.  I poured in the boiling water and then stirred slowly until everything was combined.  Last, I added the peppermint extract.  I divided the batter evenly into the two cake pans and put them in the oven.  I baked the cakes for 30 minutes, rotating the pans once at the halfway point.

I let the cakes cool and then put them into the refrigerator, covered in plastic wrap to keep in the moisture.

Once the ganache was cold (it was thick, but still runny) I used my immersion blender with the whisk attachment to beat the frosting until it was fluffy and the consistency of whip cream.  Then I chopped the white, mint, and milk chocolate to create the topping.


I put the first layer of cake from one pan onto a plate and then spread the ganache onto that layer. 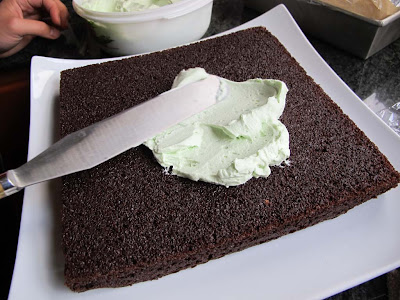 Then I placed the second layer of cake on top and used the ganache to cover the whole cake. 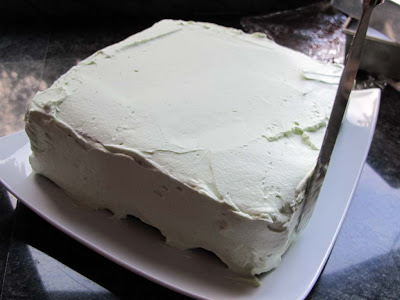 I sprinkled the chopped chocolate on top and then got small handfuls and threw it at the sides. 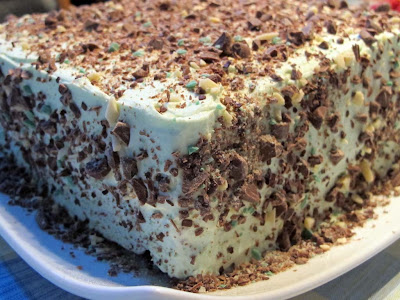 We sliced up the cake and multiple people had seconds, which is pretty uncommon for dinner with my family. 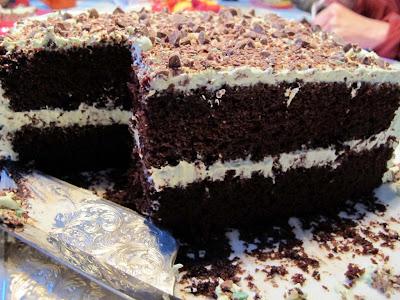 I don't mean to toot my own horn, but seriously, this was one of the best cakes I've ever had, and definitely the best one I've ever made.  Probably not the prettiest cake ever, but it was amazingly delicious.  Toot! :)