January 31, 2011
This recipe comes from Essence of Chocolate: Recipes for Baking and Cooking with Fine Chocolate

.  I decided to mix the dry ingredients ahead of time since I was going to bake it up in Tahoe on my cabin trip. 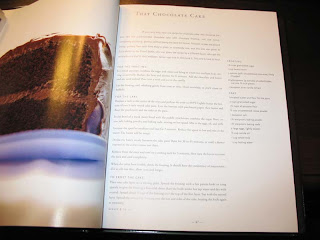 All the dry ingredients were mixed two days ahead and kept refrigerated in a plastic container (since it has baking powder in it). I also made the ganache frosting ahead of time and whipped it just prior to frosting the cake.

Frosting first... You have to make sure that the chocolate and cream stays in an emulsion, so I've found the best way to do that is to heat up the cream (I did it in the microwave with 30 second intervals until it reaches about 180F, but you can also do it over the stove), and then pour it over the chocolate.  The unsweetened chocolate takes longer to melt than the milk chocolate so I poured the some of the hot cream over that first, then added the rest of the cream and the milk chocolate chips.  If you don't stir gently and carefully (stirring small circles in the center of your bowl is the best way), the chocolate will come out of emulsion and ends up just floating in little chunks in the cream, which doesn't make for the best consistency.

Most ganaches are 1:1 chocolate to cream/liquid, but I wanted a lighter frosting, so there is more liquid than that ratio in my recipe.  After the chocolate and cream are combined, I streamed in the Chambord and continued to stir.  Then, I refrigerated the mixture and whipped it with a hand mixer prior to putting it between and on top of the cake layers so that it was lighter and fluffier than traditional ganache, especially since I frosted the cake and left it in the refrigerator for several hours until after dinner.

I lined two 9"x9" baking pans with parchment paper (cutting where the corners are and folding the paper makes this much easier).

I stirred the oil and the milk into the dry ingredients, and as I write this, I realize I forgot the 2 eggs that the original recipe calls for, so I've eliminated it from my ingredients list.  Then I poured the boiling water in and stirred / folded until it was all combined.  I poured even amounts into the two cake pans and baked them for 30 minutes, rotating the pans once at the halfway point.  I let it cool for at least an hour before frosting.

So my two major blunders: I forgot the eggs and I did not account for the altitude.  The cakes fell in the middle and made for a not so pretty, lop-sided, and much more dense, richer cake. 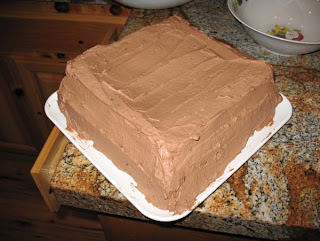 (sorry for the crummy blurry pic below) 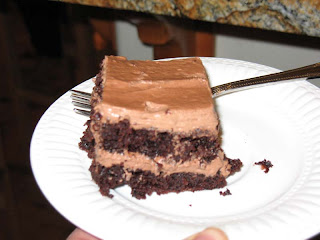 Everyone seemed to love it though - my boyfriend especially loved the frosting because it was so much lighter, less rich, and more like chocolate whipped cream than a frosting.  Will post again with better pictures when I do it right at my normal altitude. Sounds like from http://www.ochef.com/327.htm that you need to decrease the amounts of leaveners as well as the cooking time for high-altitude cooking.  Good to know. :)