June 07, 2011
Sometimes I like to try to make salty things. The Flavor Bible

has been my best friend.  It lists out all the ingredients alphabetically, and all the other ingredients that go well with that listed ingredient.  Then, if you're like me and don't magically know what tastes good together, you can use this book to create things and cheat.

First I peeled the beets, carrots, and the potato.  I cut them all into 1 inch cubes and threw them all in 4-qt pot of boiling water with a dash of salt for 10 minutes.  Then I poured it into a colander to drain them.

While that was boiling, I cut the onion in 1/2 and sliced across the grain lengthwise. I put the onions into a pan with the butter to caramelize it.  This took a bit of time - I had the drained beets, carrots and potatoes sitting in the warm pot, not over the flame.

As the onions were caramelizing, I sliced the mint.  Once the onions were done, I put the onion butter mixture into the beet mixture and add salt and pepper to taste. I put 1/2 the batch into a saute pan and cooked both over medium heat to slightly brown the edges. There was a bit too much to get it to brown at all in just the pot.  At the end, I added the mint and tossed until the mint was wilted. 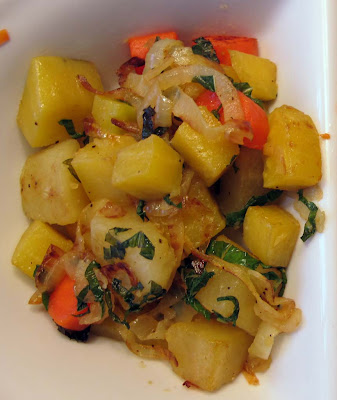 The boyfriend and I really enjoyed this - the mint was a really nice surprising flavor that went well with everything else. I only had 1 potato left when I made this, but I might want to do two next time for better balance.  Boyfriend made this chicken with wonderful guajillo tomato sauce and giant corn based off of a recipe from the Rick Bayless Mexican Everyday

cookbook.  But, since I was cooking, I didn't really pay attention to what he was doing... In any case, here's a picture of our complete dinner. :) 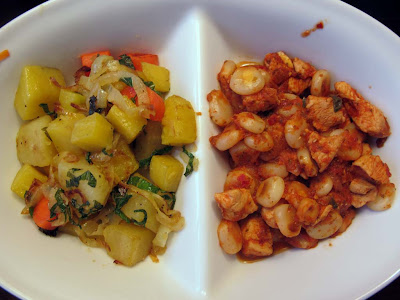