March 17, 2011
Happy St. Patrick's Day!  It's amazing, even though work has been crazy, I was able to dedicate a bit of time to making my second St. Patty's Day treat.  In addition to the Bailey's truffles, I opted for Guinness truffles. I'd been wanting to make these two truffles for St. Patrick's Day for a couple years now, and this is the first time I actually achieved my goal.

I always start tempering the chocolate first, because that takes the longest.  I put the milk and dark chocolate in my Pyrex bowl and started microwaving it at 30 second intervals.

), since I would be adding the cold Guinness to it later. 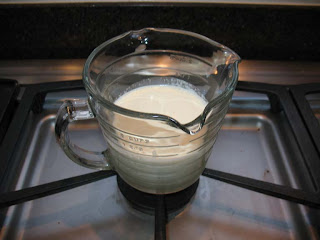 Then I measured out the Guinness into a small cup, 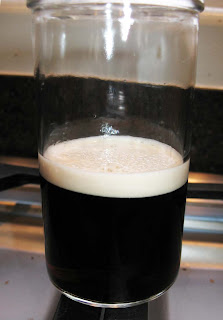 and poured it into the cream mixture. 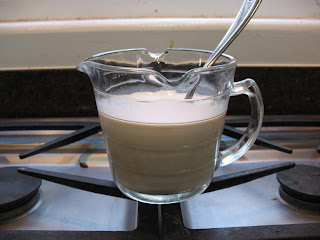 Once my chocolate was tempered, 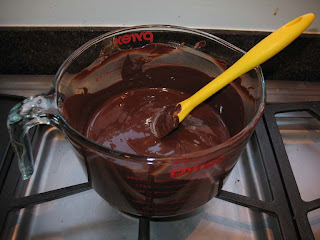 I poured the cream / glucose / Guinness mixture on top, and began stirring in small circles until it was combined. 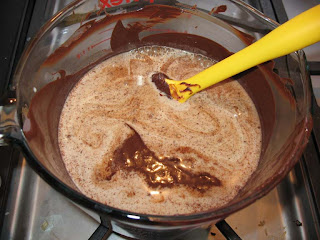 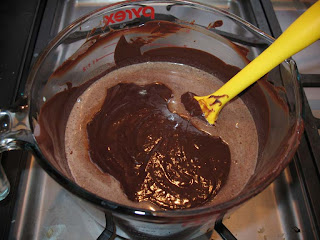 Once thoroughly combined, I put the softened butter on top, 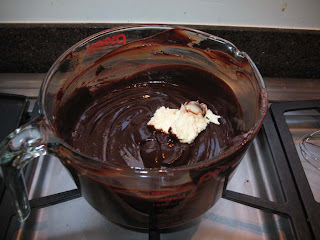 and used my hand blender with the whisk attachment to blend in the butter.  Once combined, I put some plastic wrap on top and let it sit overnight until it set.

To start, I began tempering some more chocolate - I used a mixture of milk and dark just because I had some milk leftover from the Bailey's Irish Cream truffles. You can just use dark if you wanted.  Also, depending on how big the truffles end up, you may need more or less chocolate for enrobing.  Since this takes time for heating / stirring, I always start tempering first so that I can do other things while it's coming to the right temperature. I also prepared my baking sheet by lining it with plastic wrap, so I could put my dipped chocolates on it.

Then, I removed the plastic wrap and used my 1-1/8" scooper to scoop out truffles.  I rolled these and then put them into a bowl of a mixture of cacao nibs.  I used Guittard cacao nibs & organic cacao nibs from Nuts Online. 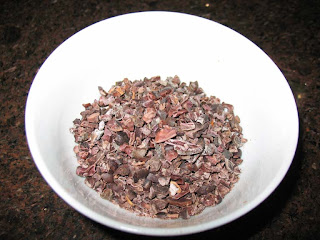 Scooped on the left, rolled and nibbed on the right... 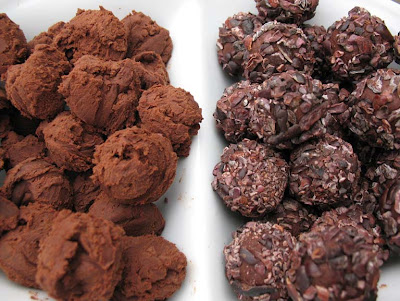 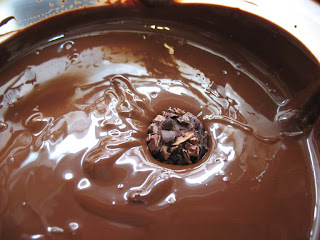 and fished them out with my spiral dipping utensil. 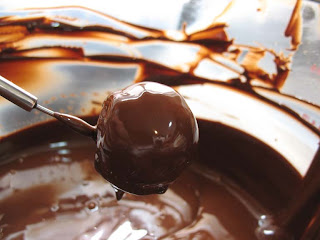 Then I placed them on the prepared baking sheet. Once they were all set, I boxed some for my mom with the Bailey's truffles, some for my boyfriend for his work, and the rest into a box for my work. 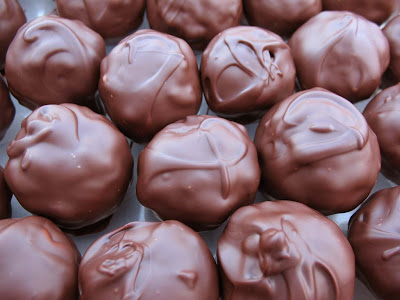 Boyfriend didn't think these tasted much like Guinness, but I thought I could taste it.  These are definitely in a standoff against the Bailey's truffles though.  I'm not going to lie... the dark chocolate shell, the nibs, the creamy center with a hint of Guinness... the taste and texture of these truffles pretty much make my eyes roll back in my head when I eat them.  Boyfriend thinks the Bailey's truffles win for overall taste, but I'm going to have to go with the Guinness ones.  In any case, I'd have to say being a judge at the contest > winning.

Boxed with the Bailey's truffles: 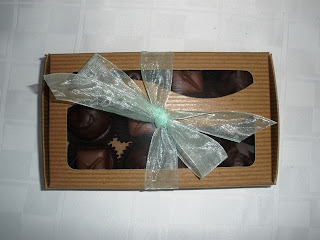 Here are some artsy fartsy shots I took of the process.

Although, I think I have to agree with Homer: "Less artsy, more fartsy."

You'd think that since I got my BA in Literature, I'd be more prone to quoting the Odyssey's Homer.  Well, unfortunately, you'd be wrong.
Nib closeup... 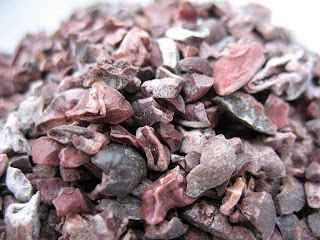 Truffle Standoff Series
Silliness (only two of these made it into the recipe). I was just going to post the pictures, but then I felt like I couldn't without the little commentary that was in my head.

"Look at these naked bitches -
poor things don't have nibs!" 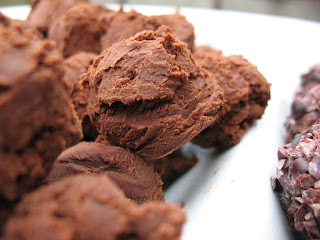 "Why don't you say that to my face?! You think you're
better than us 'cause of your stupid nibs?" 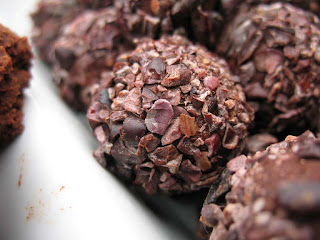 "No, I KNOW we're better than you because we have nibs..." 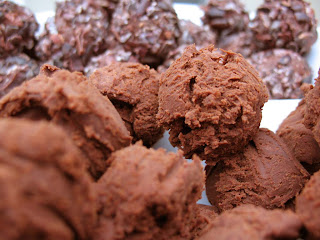 "Oh it's go time, sluts... You won't think you're so hot when your nibs are covered!" 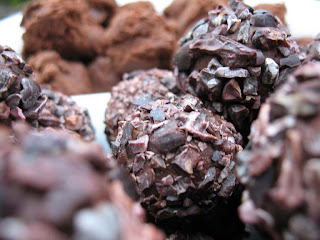