February 09, 2011
Every Chinese New Year, my mom and I do some Chinese cooking together.  What a great opportunity for my new blog, I thought. :)  Most of my friends know that I'm just starting my foray into the savory and it's not second nature to me like baking has become (try to ignore my high-altitude and mis-cake chocolate cake posts for now).

Usually my mom makes nine-layer pudding (gow chong go), New Year's muffins (fat tay), and New Year's pudding (neen go), and then we make Su Mai dumplings together.  This year my mom still made the nine-layer pudding and the New Year's pudding, but we didn't have time for the Su Mai or muffins.  We talked about how only she and I like eating the muffins so it would probably be a waste, but she said, "I really only want to make them to see if they burst." I thought that was cute.  Bursting fat tay is supposed to signal good luck for the New Year.

My mom went to epicurious.com to find our turnip cake recipe. 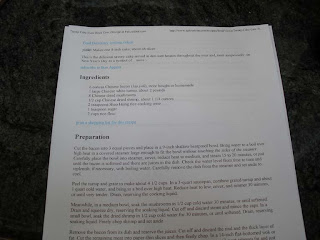 I found this recipe fairly difficult to use, but after reading it a few times, we figured it out.  And, of course I had to alter it, because I don't like those little shrimps.

The original recipe requires steaming the bacon, but that seemed like a little too much work when I figured the microwave would do just fine.  I also felt the order of operations was awkward and not time efficient.  I think the salt was forgotten in the ingredients of the original recipe because it's listed in the instructions, so I put my mom's recommended salt amount.  But, feel free to go find the original recipe - this is just my version. :)


My mom had already started soaking the mushrooms and scallops before I came over: 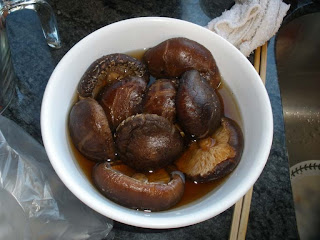 She likes to use the shrimp, so she had some of that soaking too (scallops are on the left): 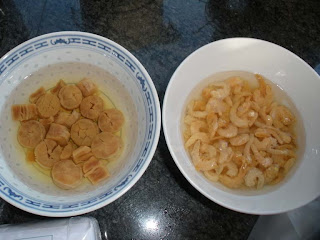 First I peeled the daikon. It looks like this when you buy it from the store: 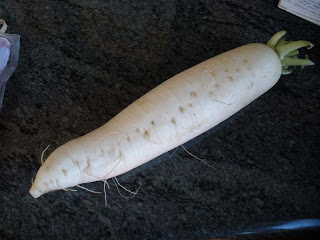 I used a grater to grate both of the turnips.  The recipe calls for the grated turnip to simmer for 30 minutes, so I figure this is best to start first, so that you can do everything else while the turnip cooks.  Once I grated all the turnip, I put it in a 3-qt stock pot with 1 quart of water.  I got it boiling and then let it simmer for 30 minutes.

After that I worked with the bacon.  The recipe assumes you have whole slabs of bacon, but my mom got the pre-chopped kind, which was nice.  Instead of steaming it, I just put it in the microwave for a little while to let it soften up and let the fats melt.  Once it was sizzling a little, I took it out, let it cool a bit, and then fished out the big hunks of fat.  The recipe says to cut the fat off. 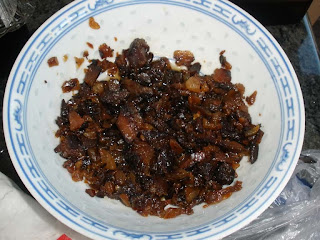 Then I chopped it into finer pieces.
Next I chopped up the mushrooms and made sure to remove the stems. 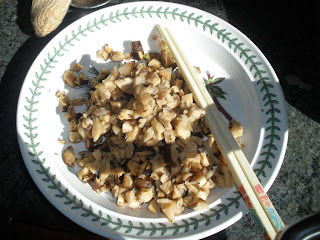 And then the scallops: 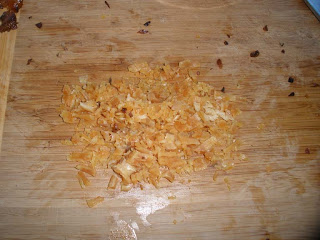 By now the turnip was done cooking so I drained that, saving 1 cup of the cooking water: 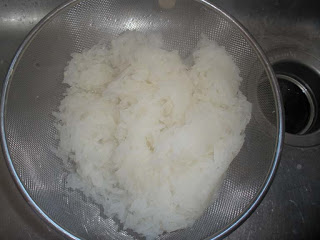 Then I mixed the flour and the 1/2 cups of soaking water from the mushroom and scallop (1 cup liquid total).  Once that was mixed in, I added the 1 cup of hot turnip water I'd saved and mixed that in.  Then I added the salt to the flour mixture. 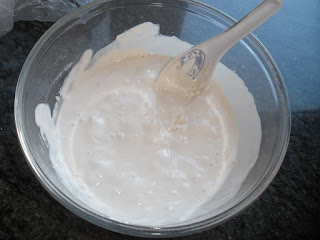 Once that was all mixed, I put the bacon in the stir fry pan (or wok if you want) and heated it until it was sizzling before adding the scallops and the mushrooms.  Then I mixed the wine with the sugar and tossed that in and stirred it all: 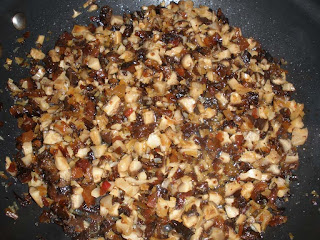 Then, once all that was hot, added the turnip: 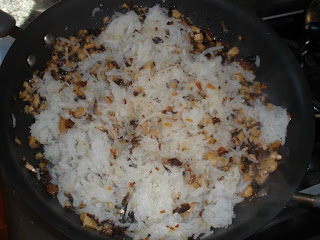 And after mixing that around for a while, I poured in the flour mixture and turned the heat down, and then off - I didn't want my cake cooking in the stir fry pan. 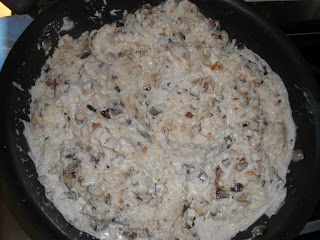 And then I put it into the baking pans and smoothed over the surfaces: 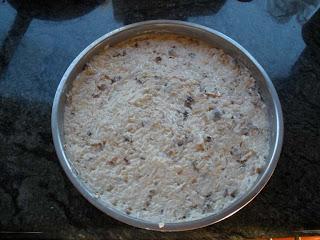 My mom helped prepare the steaming pans and we put the cake pans in.  We made sure to replenish the water at the bottom of the pans when it got low, checking every 15 minutes or so.  It took about 45 minutes to finish cooking - the recipe says to wait until the surface is firm.  After taking it out, my mom threw some of the chopped green onion on top.  Then we let cool in the fridge for 3-4 hours, like the recipe says. 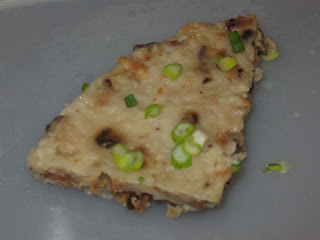 I think actually the green onion was supposed to go on after pan frying it, though.  So after refrigerating it, I pan-fried it in a little bit of canola oil for a couple minutes on each side in a non-stick pan until it was browned. 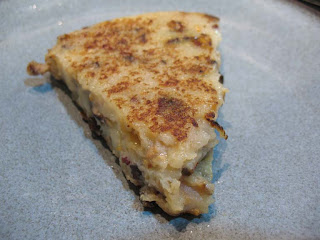 Tasted pretty good.  My mom told she was so proud of me for trying to make something Chinese I've never made before.  "Even I've never made it!" she said to me. Chinese New Year cooking with my mom is definitely one of my favorite traditions.  Happy Year of the Rabbit, everyone!