February 22, 2011
Marshmallows have a special place in my heart because my boyfriend and I made these together on our third date.  He's a chemist and I remember commenting on how precise he was with measuring everything.  Nothing sexier than a guy who can cook... and who wants to help make candy. :)

Unfortunately, he's on a business trip this week, so I made a half batch by myself from my favorite book, Chocolates & Confections 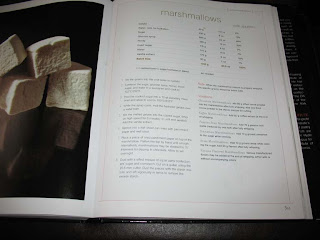 I've found that sprinkling the gelatin on top of the water with a spoon works best for avoiding clumps and allowing it to bloom. 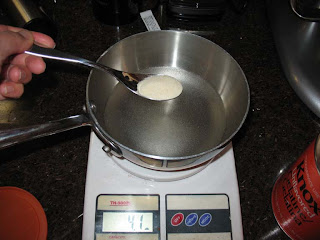 Then I placed the gelatin in another pot filled with hot water (not quite boiling, otherwise you may damage the gelatin - you just want it to melt). Here it is bloomed, but not melted yet. 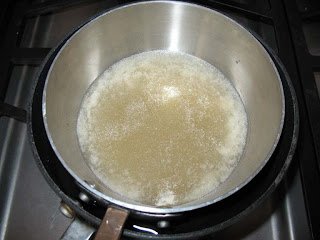 In another pot, I put in the rest of the ingredients, minus the vanilla bean paste. 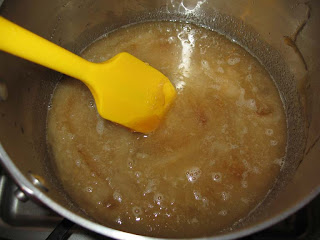 I heated over medium flame and put in a candy thermometer. 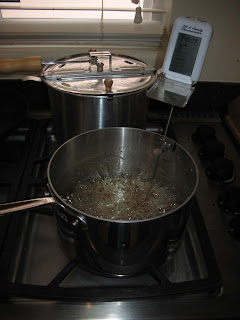 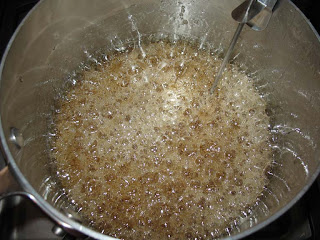 Then I turned the heat off when the thermometer reached about 251.5F and continued stirring.  It reached 252F shortly afterward. Candy continues to heat a bit after the flame is turned off.


I poured the liquid into my standing mixer bowl. 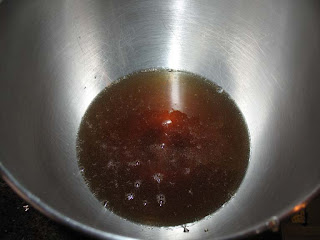 Then I let it sit until it reached 212F before pouring in the melted gelatin.  This prevents the gelatin from being damaged by the heat of the sugars. Once I poured in the gelatin, I started the mixer on a medium setting for the first minute, then to the highest setting. 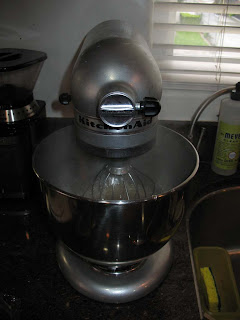 I used to be terrified of making marshmallows so it was fairly long into my candymaking quest that I decided to finally bite the bullet.  My worst fear was that 200+F degree sugar was going to be flying all over the place from the mixer.  I thought I'd take a little video proving otherwise - just in case anyone else had this same fear, perhaps this will allay it.

While waiting for the mixture to get fluffy (recipe calls for 8 minutes, but since it's a half batch and a different mixer, I just try to watch it and see when it looks fluffy enough), I cut some parchment to fit a 9"x9" cake pan and poured about 1.5 tsp of the oil on the paper and brushed it around with a pastry brush. Then I oiled a silicone mat in the same fashion.

Once the marshmallow mixture turned white, I poured in the vanilla bean paste and let it continue to whip until the correct fluffiness. 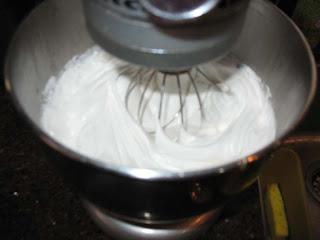 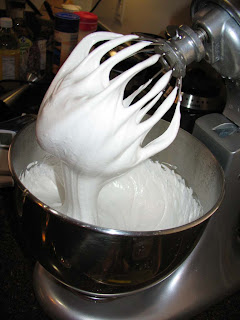 Then I used an oiled silicone scraper and scraped the mixture into the prepared pan, on top of the parchment paper.  I put the oiled silicone mat on top and pressed it down so the top was flat. 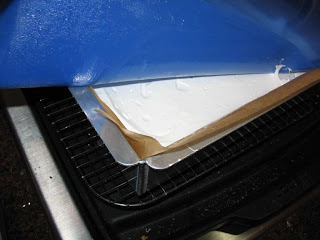 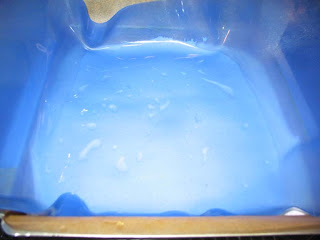 It leaves a big mess, but it's easy cleanup because it's water soluble. 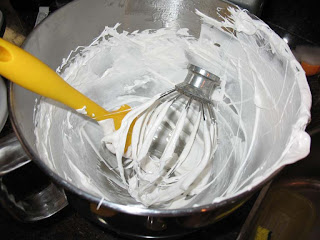 Just soak in some warm water.
Then I waited a few hours before I started cutting it up.  I peeled back the silicone mat and using the parchment paper as handles, took the marshmallow slab out and placed the paper on a cutting board. 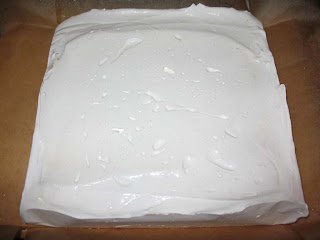 I took an oiled knife and cut strips, and then cubes so I had about 1.5" square cubes.  These cubes were then dredged in the powdered sugar / cornstarch mixture. 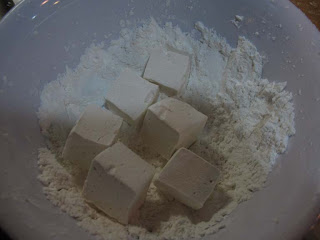 After being rolled, I put the marshmallows in a colander to shake off the extra powder. 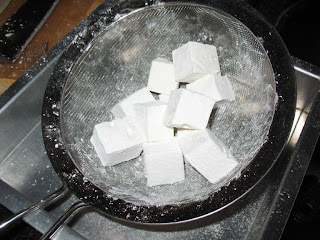 Once the whole block was cut up, I had a nice bucket of marshmallows.  Yes, I keep my marshmallows in an old glucose bucket. :) Handy dandy marshmallow carrier. 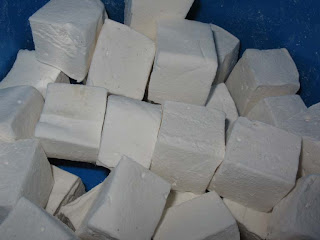 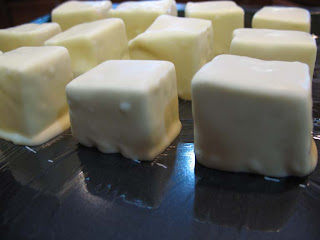