I started with a recipe from Chocolates & Confections 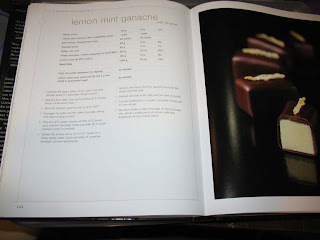 However, I didn't have any mint, I fear butter because it's even more fat in the recipe (and we just discussed what fat does), and I was afraid of making the whole batch.  So... without further ado...

Since tempering chocolate takes the longest, I did that first.  Then, I put the lemon peel in the cream with the glucose and set it on the stove to boil.  I made sure the lemon peel pieces were big so that I could pick them out - normally I'd use a rasp, but if I did that I'd have to use a strainer instead of the chopsticks. 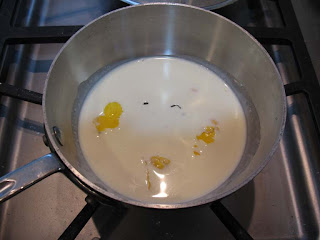 Then I used my juicer to prepare the lemon juice and set it aside in a glass bowl. 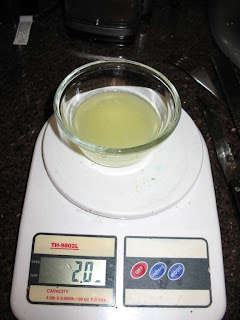 Once the cream came to a boil, I turned off the flame and put a lid on the pot. I let it steep for 5 minutes before removing the lemon peel, and then waited for it to cool to 105F.  Then I microwaved the lemon juice for about 20 seconds until it was 105F.  I rechecked the temperature of the chocolate and had to reheat it a bit - you have to make sure not to reheat it too much because it will come out of temper and you will have to reseed it. Once it was back at 86F, I poured both the lemon juice and the cream on top. 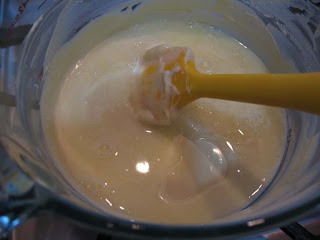 Here's the scary part.  If you don't stir it correctly, you'll end up with the gloppy mess.  I tried to stir small circles on the surface of the chocolate (maybe only penetrating 1-2 inches into the chocolate), rotating around the bowl.  Halfway through it looks like this: 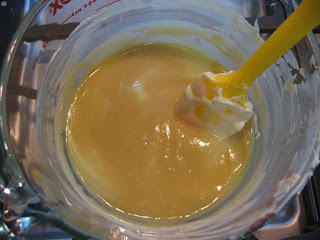 And once it's all mixed in, it looks like this. 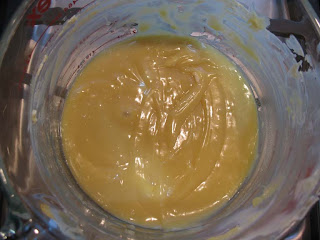 I put plastic wrap over it, covering the surface of the mixture, and then left it overnight to set.

Once it was set, I removed the plastic and used my 1-1/8" scooper

to scoop out truffle balls. 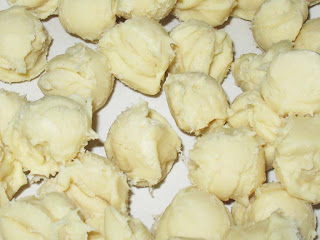 Then I rolled them in my hands until they look like this. 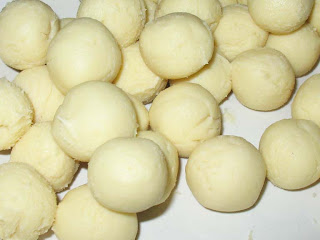 It's best to do this and then leave them while you temper the enrobing chocolate so they can dry a bit and not stick to the dipping utensil so much.  I tempered the dark chocolate and then began the dipping process.  I only dip one at a time. 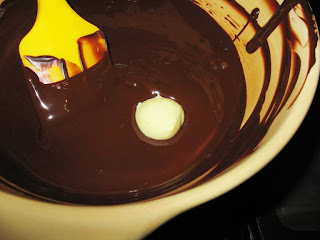 Then I fish it out with my spiral dipping tool fork

and place it on the plastic wrap on the baking sheet. The book describes dipping twice, probably because of this problem - this is the bottom of the dipped truffle. 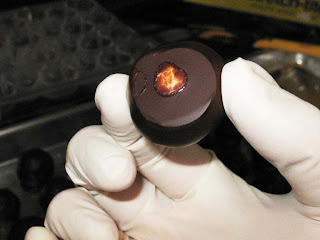 The dark chocolate contracts as it sets and then squishes a little of the soft truffle out of the bottom at the weakest point.  But, I don't like dipping twice because it's too hard to re-find the bottom, and then I think the shell is too thick.  So, once all the truffles are dipped, I go back with gloved hands and re-dip the bottoms in the remainder of the dipping chocolate - just a little chocolate so that the bottom is sealed.

And the finished product is shiny and sealed and looks like these: 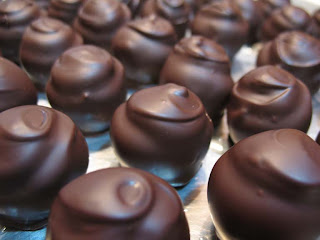