Fudgy Brownies with a Crunchy Shell

August 19, 2013
So I was experimenting with another recipe from The America's Test Kitchen Family Baking Book.  It ended up tasty enough that I was asked for the recipe. These brownies ended up fudgy in the middle with a kind of crunchy shell on top. I ended up with this:

Adjust oven rack to higher middle position and preheat to 350F.  Line a 9x9" baking pan with foil and grease it - leave enough foil on the edges so that you can use it to lift the brownies out later.  I used olive oil, but you can use butter or any other type of oil you like.

Add the sugar, eggs, vanilla and salt to the chocolate mixture and stir it all in.  Fold in the flour and then the milk chocolate chips.  I was using bread flour because I wanted to see what would happen, but if you do this, don't overmix because you'll create too much gluten.  Mix until just combined and there are no more flour lumps.

Spread the mixture into the bottom of the greased pan and bake for 35-40 minutes, rotating once at the halfway point.  The original recipe says if a toothpick is inserted it should come out with a few crumbs, but this recipe has such a crunchy shell, I'm not sure if this would end up happening.

Using the extra foil at the edges once it's cool enough to handle, pull up the brownies out of the pan and allow them to further cool on a rack.

I cut into them while they were still warm. 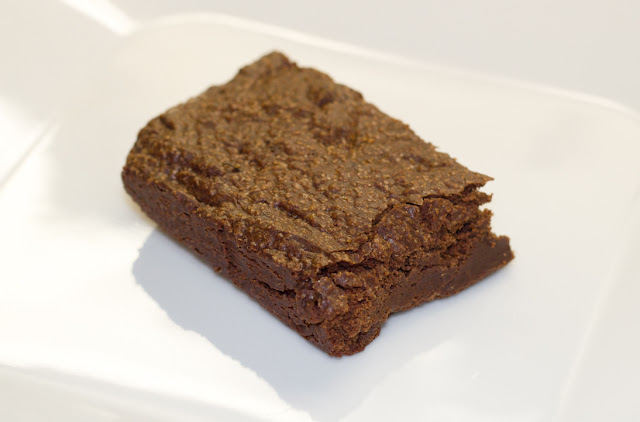