August 03, 2013
I had some extra green onion, so I'm not really sure how many stalks it was.  Sorry about that.  In any case, I also had some mozzarella cheese and a hankering for dinner rolls.  I started with the Fluffy Dinner Rolls recipe from The America's Test Kitchen Family Baking Book, but then I altered it some.

Microwave the milk, honey, butter, and oil together in a large glass measuring bowl at 30 second intervals until all the butter is melted and the mixture is at about 110F.  Then using a fork, whisk in the egg.

Knead the mixture on medium-low setting for about 8 minutes.  If after 4 minutes, the dough is still really sticky and comes off on your finger when you touch it, add the remaining 1/2 cup bread flour 2 tbs at a time until the dough is no longer that sticky.  It shouldn't be really dry though, either, because then the bread will be too dense and won't be able to rise sufficiently.

The original recipe says to form the dough into a ball and place into a large oiled bowl and cover with plastic wrap.  I just put some oil on the standing mixer bowl and put the dough back in there because I hate washing things.  Then I covered the mixing bowl with a warm wet towel and put the whole thing in a warm oven (I preheated the oven for about 2 minutes to about 350F and then turned the oven off - this made it about 100F in the oven).

Once the dough has at doubled in size (1 to 1 1/2 hours), turn the dough out onto a clean counter and create a 15" log.  Cut the dough into 15 equal pieces.  Roll each long dough piece over on itself in thirds and then create a ball - basically you are trying to make all the edges smooth and pull them all down to the bottom of the roll so that when the dough rises it will be nice and puffy with no broken edges.

Put the rolls into the prepared baking dish - 3 x 5.  Brush oil on them and let them rise in a warm place again for about 45 minutes to an hour until they are all touching each other and fill the pan.

Heat the oven to 350F and then make the egg wash.  Add about a tablespoon of water to the egg and whisk with a fork.  Brush this over the tops of the rolls.  Bake for about 25 minutes, rotating the pan once in between, until the tops are nice and golden brown. 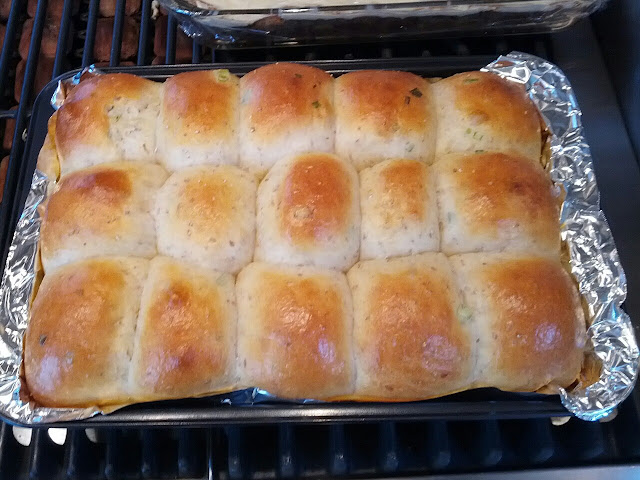 I couldn't really see the cheese once they were done, but they were SUPER fluffy and soft. I guess if you like your cheese to be more noticeable, you should cut chunks instead of grating.  Everyone seemed to like these though.  Enjoy! 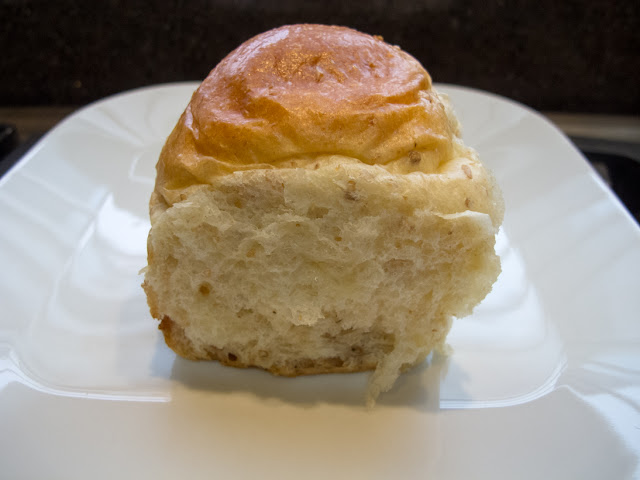