August 24, 2012
I've been doing a lot of yeast experimenting lately on my waffle questing. In this recipe, I wanted to find out if I could use yeast as a leavener for a sweet cake (not quite like panettone, more like a regular cake and less like a sweet bread).  I have not found out the chemical reason for it yet, but yeast doesn't like having too much sugar and it under-rises.  I read this on another website, but there was no explanation for why.  If I had to guess non-scientifically?  I'd say that since yeast uses the sugar for food, which later makes it expel gas, perhaps having way too much food turns them into gluttons and then they kill themselves overindulging before they ever get to make enough gas.  All you food scientists out there, feel free to correct me and tell me I'm a moron.  :) At least then I'll get my answer.

In any case, here was my experiment.

I made the batter the night before, like in the overnight yeasted waffle recipe I've been toying with from the America's Test Kitchen Family Baking Book recipe.  First, mix all the dry ingredients in a large bowl.  Then mix the honey and milk and microwave it until it's around 110F.  You can use a thermometer or your handy dandy temperature gun (this one is my favorite).  Pour the milk mix into the dry mix and stir until combined. Over-stirring causes gluten to form, so don't stir more than you need to for combining unless you want it chewy.

Melt the butter and add it and the oil to the mixture and fold it in.  Beat the eggs slightly and fold that in.  Put plastic wrap over the bowl and put it in the refrigerator overnight.

The following morning, I was hoping for the nice bubbles that I saw in the Havarti Dill Yeast Muffins recipe, but no such luck. 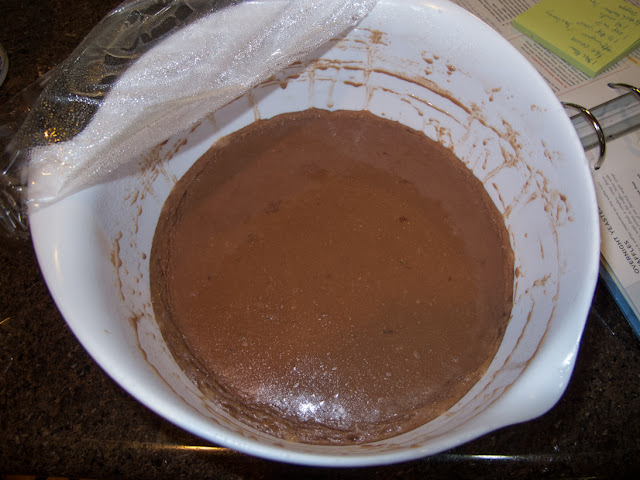 It looked flat and bubble-less, because of the aforementioned excess sugar.   I preheated the oven to 350F, and while that was heating, I decided to see what would happen if I put it in the waffle iron.  I turned on my Waring Pro Waffle Iron (it's pretty awesome and I got mine from Costco - well, my mom did for my birthday, but let's not split hairs) and decided to put a couple ladlefuls in there on heat setting 4 to see what would happen. 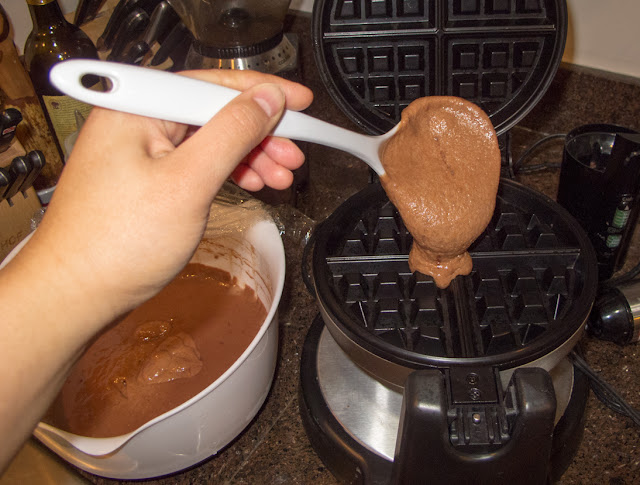 Results were not good, my lovely blog readers.  There was not enough structural integrity, probably because of the sugar, and I got the saddest, limpest waffle ever. It barely made it out of the iron, and at least it didn't stick due to the awesome magical coating on the Waring Pro. 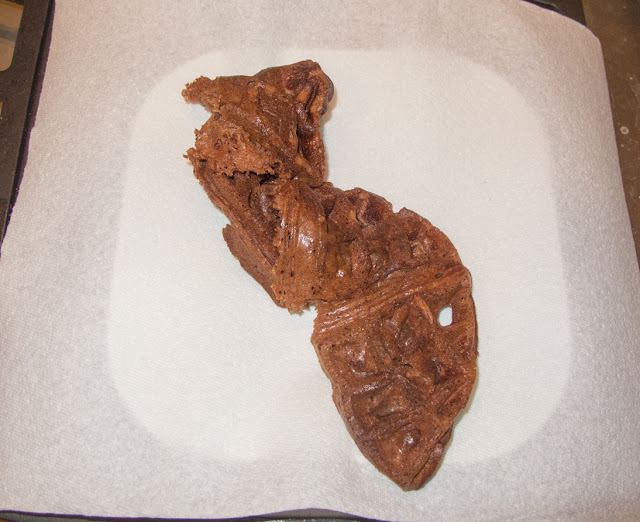 It tasted okay, so I went ahead and filled my cupcake liners / pan. After the waffle fiasco, I had enough batter for 1 large dozen and 1 small dozen. 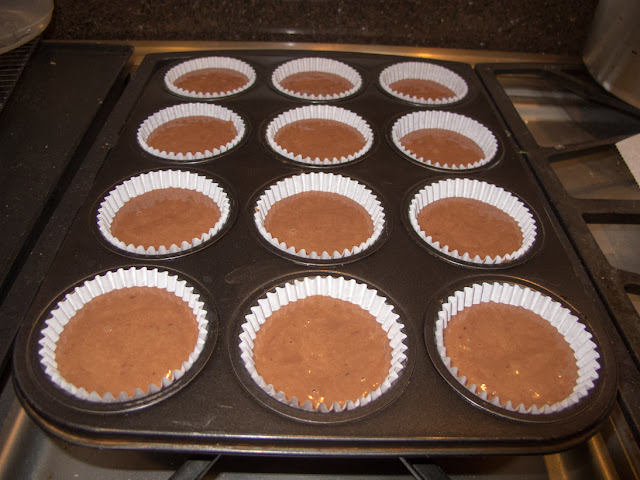 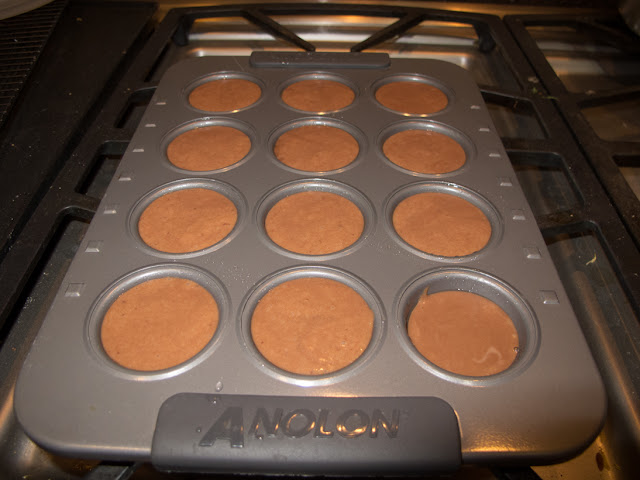 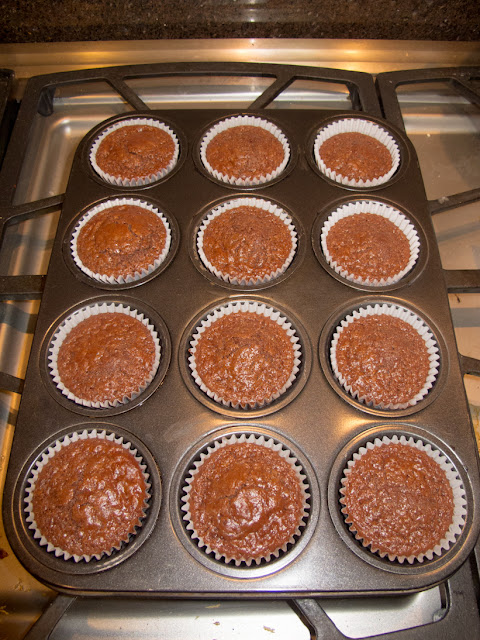 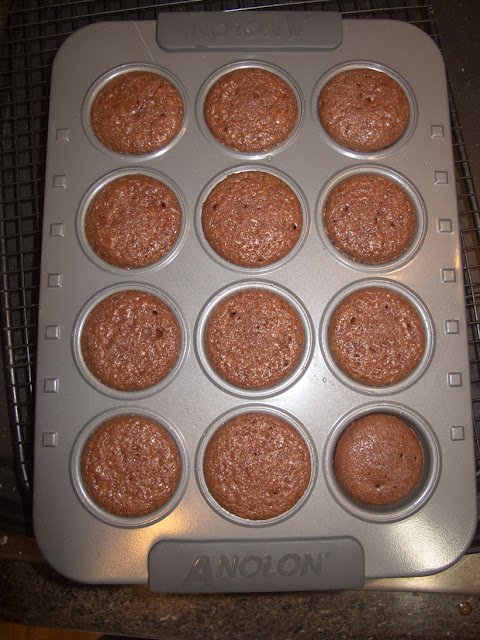 That last small cupcake in the lower right corner, I was really scraping the bottom for batter. So they didn't rise very much, but they sort of had the consistency of Filipino puto if you've ever had that before.  Basically it's a steamed cake.

I made some ganache to go with it too, another experiment.  It was pretty good, but I didn't measure, so the measurements are just a guestimate, since I just threw everything in a 2c glass measuring cup. Coconut oil makes for the most delicious meltaways, so I thought it would be perfect in a ganache.

I put the chips, oil, and 1/4c of the milk in a glass measuring cup and microwaved it for a minute.  My microwave is weak, so you probably only need 30 seconds.  Once I stirred it, I saw that it was starting to come out of emulsion, so I added a little more milk to bring it back together.  I know! It's magic.  Once it was all combined, I spread generous dollops on the large cupcakes. 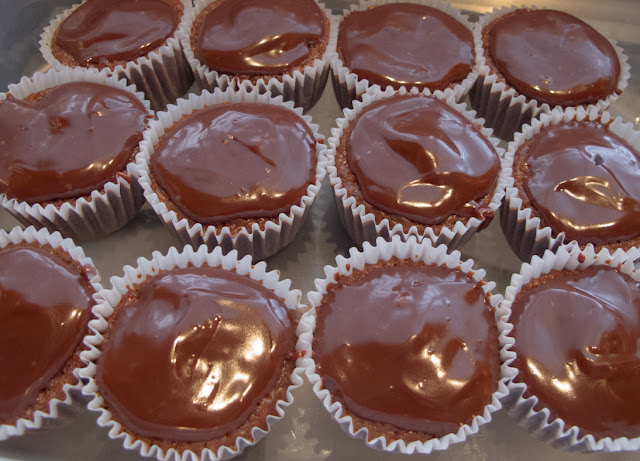 I ran out of time before work, so I didn't do the small ones.  These tasted pretty good.  I think next time, I'll add less sugar and more cocoa powder since they ended up a lighter chocolate flavor and didn't rise as much as I'd hoped.   But, this is good news for people trying to cut down on their sugar intake.  Perhaps I'll have to try a whole wheat version with just a touch of honey or maple sugar or something "healthy."