March 05, 2012
I wanted to make some cupcakes for my grandfather's 96th birthday this weekend so I made these. I was more interested in the frosting so I just made the Yellow Cupcake recipe from The America's Test Kitchen Family Baking Book. I did a half batch and used lowfat milk instead.

Preheat the oven to 350F. Beat butter and sugar with a mixer until fluffy.  Beat in the eggs, then the vanilla. Beat in 1/3 of the flour mixture, then 1/2 of the milk. Beat in 1/2 of the remaining flour, then the rest of the milk.  Beat in the last portion of the flour mixture.  Using a cupcake scooper or spoons, fill the cupcake liners in the pan about 2/3 full.  Bake cupcakes for 15-20 minutes, rotating once at the halfway point. Makes 15 cupcakes.

I waited until the cupcakes were cool, and then I softened the butter in microwave.  I added milk to the powdered sugar and mixed with my standing mixer with whisk attachment. Then I melted the chocolate in microwave on 30 second intervals stirring in between, until it was all melted. I added the softened butter to powdered sugar mixture and mixed until fluffy. Then I added the melted chocolate, put in a dash of salt, and mixed until combined and fluffy. I spread the frosting immediately on the cupcakes.

I put mini chocolate chips in small sauce bowl (a little larger than the size of a cupcake). Then, I dipped the frosted cupcakes into the bowl, and sprinkled with a little turbinado sugar for a little crunch. 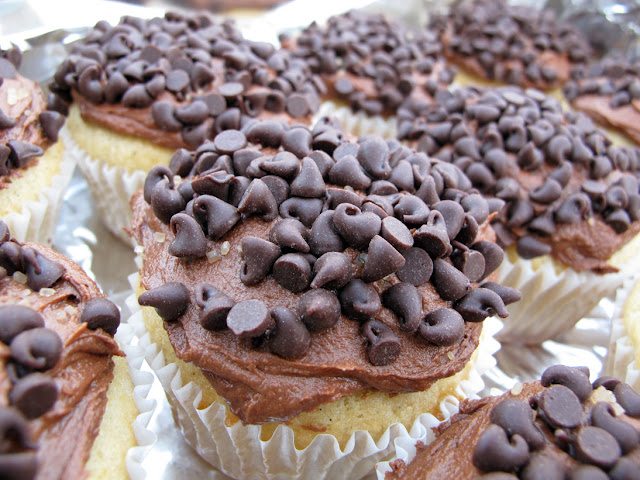