February 14, 2012
I started experimenting with chocolate mixtures in truffles and this is my new favorite.  And of course, since it's Valentine's Day, I had to put some hearts on them.  It's prettier to do once you dip in white chocolate, but really you can dip these truffles in any type of chocolate.  I did. :)  I dipped them in milk, white, and dark.  Dark and milk are my favorites, but I have to say white chocolate is the prettiest.

The thing I love most about these truffle recipes is that you can make the whole thing only using a microwave.

First I measured out all the chocolate in my 4qt pyrex mixing bowl and then put the cream and glucose in a 16 oz pyrex measuring cup. I microwaved the cream/glucose on 30 second intervals until the cream was boiling (or around 180-200F with my temp gun).  Then I slowly poured it over the chocolate and waited about a minute before slowly stirring to keep the emulsion (more details on that here).  While waiting for the cream to start melting the chocolate, I softened the butter in the microwave at 10 second intervals.  You want it as soft as possible without being liquid.

Once the cream was all incorporated, I put the softened butter on top and stirred it in.  The recipe I noted above uses the immersion blender with whisk attachment, but I've found that makes the truffles too fluffy, so now I prefer to do it by hand.  When everything was combined, I put a layer of plastic wrap on top and left it overnight to set.  Make sure you put it somewhere cooler than 70F degrees.  65F is preferable, but do NOT refrigerate it.

and then roll the truffles into balls by hand. I'm usually tempering dipping chocolate at the same time as I'm scooping so that I cut down on the prep time.  I typically temper 1-2 lbs of chocolate at a time for dipping.

A new method I've discovered so you don't have to redip the bottoms is to put the truffles on a chocolate disk and dip them with a dipping fork instead of a spiral dipping utensil. 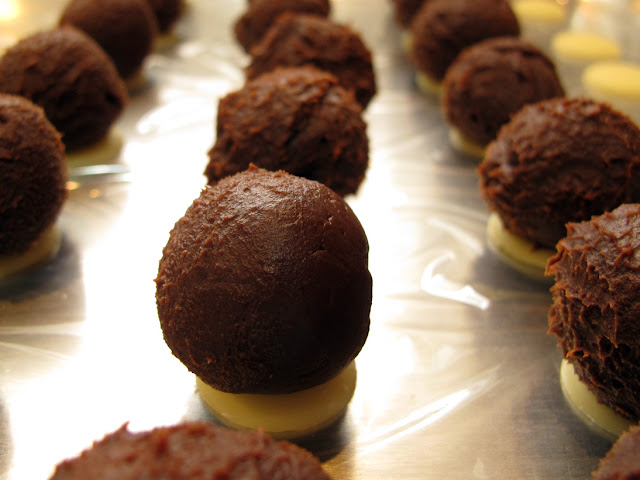 Then, as long as the disk remains on the bottom (which is sometimes difficult since the rest of it is round), you'll have nice little spheres after dipping. 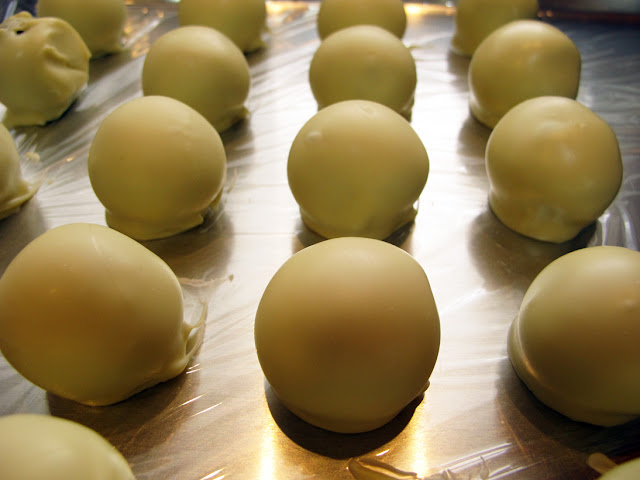 Once these were set, I tempered some milk chocolate and drew little hearts on top with the end of a chopstick. 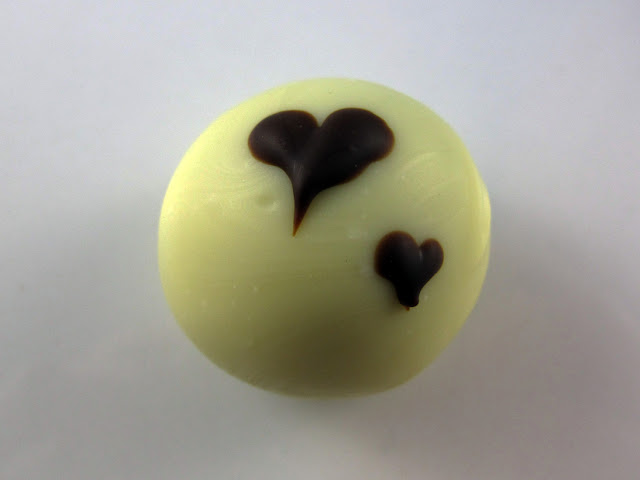 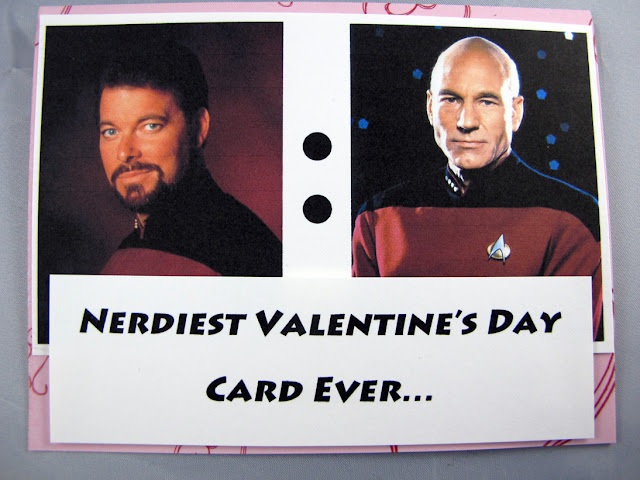 Inside
You : Me
And with that, Happy Valentine's Day, lovely people who visit my blog! <3