September 08, 2011
Typically when I'm dipping things in chocolate, I have a little bit of chocolate left over which I save for random projects.  This is one of those.
I love coconut haystacks, but I often think they are too sweet and kind of ugly.  In this version, I was going for something more light and flaky... elegant, if you will. ;)

These are guestimates since I was using ingredients that I just had around.
4-6oz chocolate couverture (mix of milk, dark)
1 to 1 1/2c coconut chips, unsweetened, organic (NutsOnline.com's version is my favorite)
First I toasted the coconut - you have to watch it in the toaster and be really careful when you do this.  Coconut is like tissue paper and burns REALLY fast. What you want is for it to be a nice golden brown and crunchy.  I usually put my toaster oven on 300F and do 5 minute increments, stirring it in between so that it browns evenly.  Somewhere around 10 minutes mine is done, but it might take longer depending on your tray size, etc.  Just watch it and make sure it doesn't burn.  :)
Let the coconut cool to at least 85F - but you can temper the chocolate in the meantime.  Once you have your tempered chocolate and your cooled coconut chips, you can put the coconut chips in the chocolate.  You are aiming for a really thin layer of chocolate so that it barely coats the coconut. 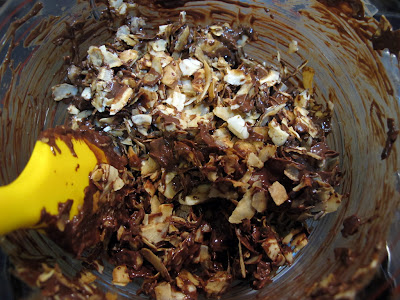 I like to have extra coconut around, just in case there is too much chocolate.  Today I was living dangerously though, and I just dumped in everything.  Turned out it was just the right amount of chocolate and coconut and I wished I'd measured. 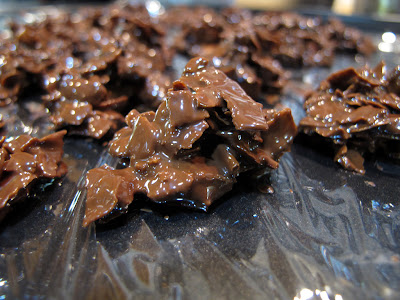 Everyone who loves coconut and chocolate loves these at my work.  Be careful though, they're so light and crunchy, it's easy to eat too many really quick. :)